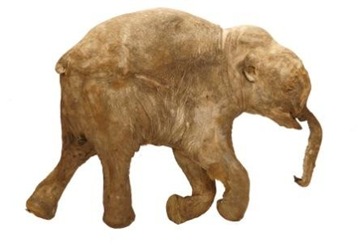 This extraordinary creature is the best and most complete mammoth carcass every found. The almost-complete body of  wooly mammoth female calf  has trunk and eyes intact and still some fur on its body; its belly is full of traces of milk and fecal residue and its tissues preserved. Its tail and right ear lobe have been chewed off by predators.

The calf, which is 3ft  tall, measures 52ins from the base of the trunk to its tail and weighs 50 kg (110 lbs). It  lived about four months before dying of suffocation after being trapped in the mud of river bank some 40,000 years ago. Her body was preserved due to an abundance of lactic-acid-producing bacteria which produced a "pickling" effect and this, combined with freezing conditions, helped preserve her intact.

According to the Russian Tass news agency, she was discovered by a reindeer herder (breeder ?) Yuri Khudi  in mid-May 1997 in  an area of permafrost in northwestern Siberia, near the Yuribey River on the Yamal Peninsula, which extends into the Kara Sea. The mammoth was named Lubya after Khudi's wife.

This four-month-old specimen was discovered by reindeer breeder Yuri Khudi when it emerged from an eroding riverbank in Russia’s Yamalo-Nenetsk region, its belly full and tissues preserved. The critter got the nickname “Lyuba” after Khudi’s wife. 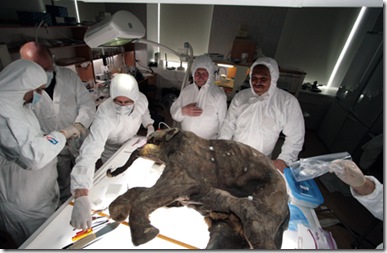 Lubya's body was first examined by a six-member international team of scientists at the University of Michigan before being flown to the Jikei University School of Medicine in Japan where researchers used advanced computed tomography (CT) scanners to obtain three-dimensional images of its internal organs. A autopsy was then performed in St. Petersburg. 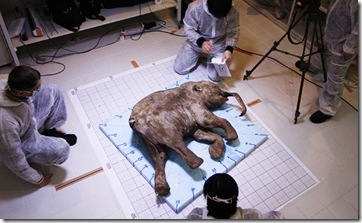 Lubya is being exhibited next year as the centrepiece of a exhibition entitled Mammoths and Mastadons: Titans of the Ice Age which will run at the Field Museum in Chicago from March 5 to Sept. 6, 2010 and will then travel to 10 cities.

The whole story of Lubya  can be found in brilliant interactive National Geographic web special. 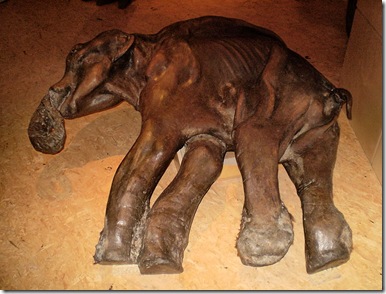 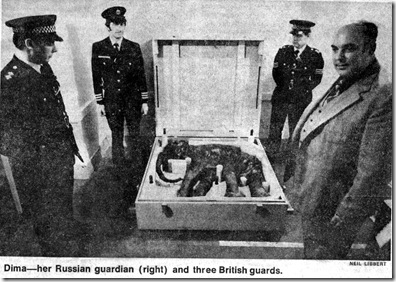 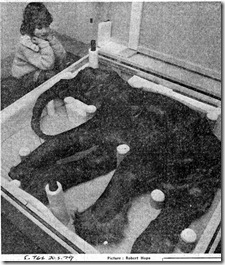 My personal interest in this story stems from the fact that, 30 years ago, another baby mammoth had been found and I was lucky enough to see it when it was exhibited at the USSR National Exhibition at Earl's Court in London, which opened on the 23rd May 1979.

This baby mammoth was named Dima, and  was  believed to be more than 40,000 years old. It was an extraordinary sight -  as was a full-size model of the Lunokhod (the Russian lunar rover - like a giant metal pressure cooker weighing one ton mounted on  pram wheels, which landed on the moon in 1970) and a cosmonaut's space craft, decked out in leather and mahogany, which was the most claustrophobic transport vehicle I have ever seen. 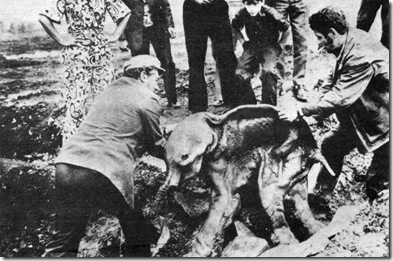 This extraordinary photo shows Dima's body being manhandled out of the frozen earth [Photo: Novosti]

According to New Scientist [8 September 1977], Dima was about six months old, 144cm tall and with reddish fur. 'It had big feet but small ears unlike even an Indian elephant's. And most interesting there are two "fingers" at the end of the trunk.'

'The frozen corpse was found by a workman, who noted a strange resistance while bulldozing in the permafrost muds of a tributary of the Kolyma River, Yakutsk Republic, USSR.' 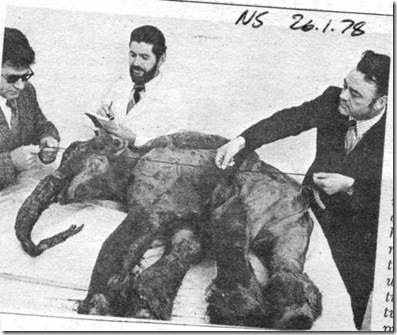 The body of Dima being studied by scientists at the Institute of geological Sciences in Leningrad. I believe that is Dr Kartashov on the right of this picture.

The accompanying text says that radio carbon dating studies have revealed that Dima, originally estimated to be 10-15,000 years old was in fact nearer to 44,000 years old.