This weekend have been sorting through The Generalist Archive for material from Rock Festivals of the 1960s and 1970s following a request from Rob Young, Editor-at-Large of The Wire  magazine, who was looking for visuals for his forthcoming book 'Electric Eden', to be published by Faber next summer.
This was a useful opportunity to review the material I hold in detail and naturally brought back memories, particularly of the 1969-1972 period when crowds of us went to a number of great festivals. The Generalist Archive contains a wealth of clippings, tickets, photos, handouts, programmes etc from a much wider number of events but, for this post, am concentrating on the ones I personally went to.

Of course, the site on the web for this subject is www. ukrockfestivals.com/index.html. This is the biggest 'collective memory' site on the subject, which is growing all the time. Checking my holdings against theirs, I have a number of things they don't have. Hoping to add at least some of this material to their collection. My account below links each one to their more substantial entry, which will tell you exactly who played what, lists available recordings, and carries photos and first-hand accounts.
1969
June 7th:: Free Festival, Hyde Park. First appearance of supergroup Blind Faith, featuring Eric Clapton, Ginger Baker, Stevie Winwood and Rick Gretch 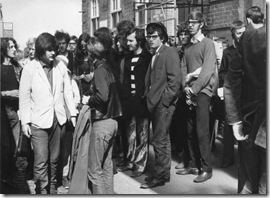 .
Local newspaper photo of members of the Worthing Workshop, the Arts Lab we were running at the time, getting ready to board a coach to take to Hyde Park. JM at far left. 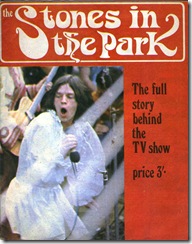 [Image: Cover of reasonably rare 32pp on-off newsprint magazine, a tie-in for the 53-minute tv documentary 'The Stones in the Park.' directed by Leslie Woodhead shown on Granada TV. Jointly published by Televista Publications and Lancashire Colour Printers.]
July 5th : Free Festival, Hyde Park: Rolling Stones, who dedicated their set to Brian Jones, who had died just three days before.  A number of us went up the night before and slept there overnight, which meant we were reasonably near the centre and front of what was by the afternoon a massive crowd estimated a half a million. 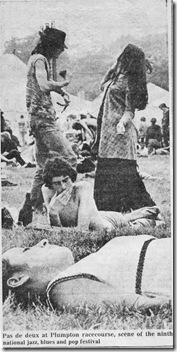 Photo by Peter Dunne which appeared on Page 2 of the Sunday Times (10 Aug. 1969). Shows JM dancing with Izzy.
August 8-10th : 9th National Jazz, Blues & Pop Festival, Plumpton Racecourse, East Sussex
This was a great Festival where we camped for the whole weekend, featuring huge line-up. Stand-outs included massive Pink Floyd show, using the Azimuth Coordinator - the first quadrophonic sound system(Frid), great Who performance (Sat) and ended with The Nice playing with an orchestra (Sun). [Met this girl who knew the band so managed to creep into an afternoon rehearsal for this performance] Saw blistering King Crimson show in one of the music tents, Robert Fripp with his black guitar, full-on strobe light. Discovered later that both Nick Kent and Joe Strummer were also in attendance.

Original handout (left) and cover of Official Programme (below)/The Generalist Archive
August 30-31st: Isle of Wight Festival: Bob Dylan
Remember hitchhiking from Worthing and getting one lift more the whole way. Arrived in the evening with just a sleeping bag and bedded down outside a tent. All night people were walking over me; in the morning discovered it was the latrine. Spent much of the Festival walking through the giant crowd selling underground papers. Remember the heat from the crowd had dispersed the clouds which formed a ring in the sky above the arena. 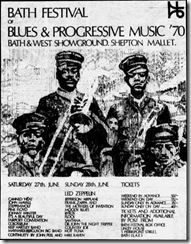 June 27-28th: Bath Festival of Blues and Progressive Music '70, Bath and West Showground, Shepton Mallet Stellar line-up of great American bands including Zappa, the Byrds. Jefferson Airplane + Led Zep (who I remember watching from a small tent in the arena with a bunch of people on LSD. Lots of casualties due to strength of local scrumpy. It rained a lot. Concert didn't in fact finish until the following morning - last act on was Dr John at 5:00 am. 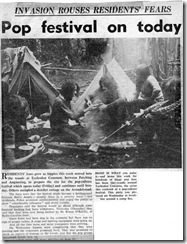 July 24-26th : Phun City, Ecclesdon Common, Patching, Nr Worthing, W. Sussex. As we all lived near the site, we helped set up the whole Festival and lived in the woods for a week. The first great free festival, it featured the first British appearance of the MC5. Awesome. Lots of police hassle at the end. 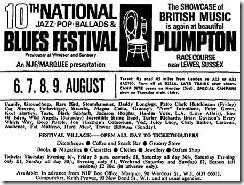 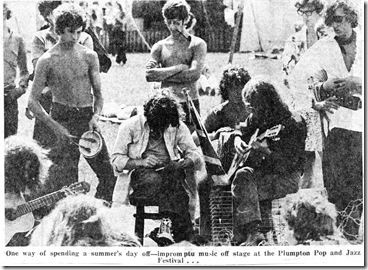 (Above) Photo from Plumopton accompanying piece in The Guardian entitled 'Peace by the Jesus tent' by John Cunningham. (undated); JM playing guitar at bottom left. [The Generalist Archive] 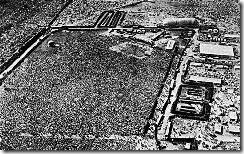 August 26-30th: Isle of Wight Festival This was a monster. Got down to the site a week early and got a job working at the communications centre for the site - a dormobile that had the only accessible phone. The outside was plastered with messages from people looking for list friends. All the press would use the phone for dictating stories to their copy desk. actually heard Daily Mirror reporter dictating story about LSD in the water supply. There was a virtual riot on-site and some heavy vibes. Incredible line-up including the amazing Jimi Hendrix, Sly & The Family Stone, Leonard Cohen, the Who etc. 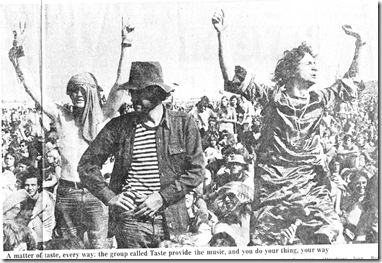 Photo by Frank Herrmann accompanying piece by Lewis Chester in the Sunday Times entitled 'Money can buy you love - if the sun shines.' [The Generalist Archive] 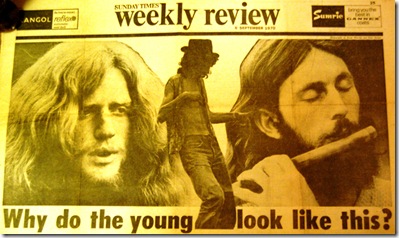 Bizarre footnote: JM in centre (cut out of the Plumpton pic above) Article was by John Sparrow, Warden of All Souls College, Oxford. 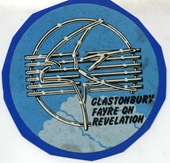 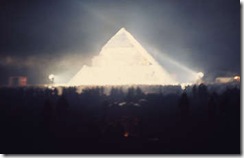 June 20-24th: Glastonbury Fayre. Worked for three days on the stage, ferrying the equipment from the ground to the stage - some 20-30ft above - using a wooden platform and a chain hoist. Dodgy. One of the great festivals. Not many people, no hassles, great music, especially Traffic.

June 25th-27thth: 10th National Jazz, Blues & Rock Festival, Reading. We drove straight from Glastonbury and, the minute we opened the van, got busted by two hippy cops. All ferried to church hall where people were being strip searched 24/7. Courts were sitting all night. They found a couple of tabs and the girl who owned them fessed up. There was torrential rain, the site was a quagmire and there was no firewood or proper facilities. We produced a protest newsletter on-site -  the Shit Stirrer (which claimed that there had been more than 100 busts)  - and for some reason I was elected to take a list of complains directly to (I believe) Harold Pendleton, the promoter, back stage. Can't remember too much about the outcome.

Rare Weeley Press Pass [The Generalist Archive]
August 27th-29th: Weeley Festival, Clacton-on-Sea, Essex. We drove down in Donald's yellow transit and hooked up with the rest of the underground press. Spent most of the festival selling papers. Battles between security and Hell's Angels. The Bad Trip tent was full. 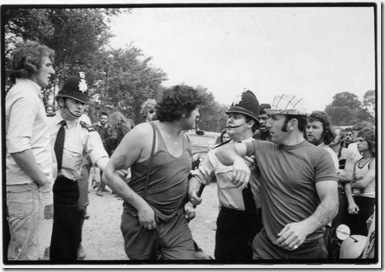 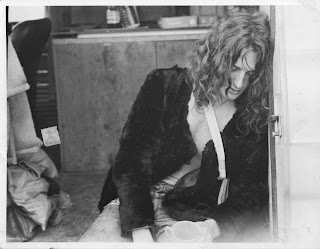 Having a kip after a heavy day of street-selling undeground papers.Unidentified photographer [The Generalist Archive] 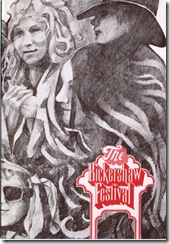 Cover of the original fold-out prospectus for the Festival [The Generalist Archive]
May 5-7th: Bickershaw Festival, Lancashire Handled the arrangements for press passes for the whole underground press with Jeremy Beadle, the festival organiser. Got delayed on the long drive up and, when I arrived, was ushered through all security to sign off the passes. Just got backstage as Dr John was walking up the ramp. Followed him up and watched him and the Night Trippers weave their magic. Another mudbath. Hawkwind had a huge tent where we all hung out. The Grateful Dead played a long set, man. 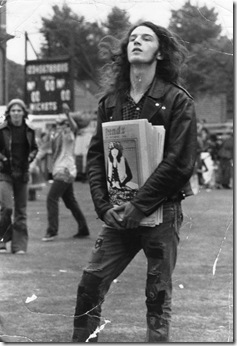 Sept 16th: Rock At the Oval, The Oval, Kennington, London.
A one day concert headlined by Frank Zappa. This is me, aged 22, street selling the second-to-last edition of Frendz,  designed by Pennie Smith. Wearing my favourite patched jeans and an Australian biker's jacket given to me by Jamie Mandelkau. Photo by Ron Reid.
at 5:08 pm

Got to shamefully few concerts over the years, J, but remember that one. Would never have recognised that paper seller, though.

Damn fine blog, John. Deserves more readers, to put it mildly. What might be done to get the word out?