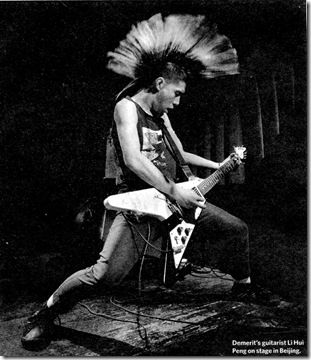 Who would have thought, back in the day, that 30 years after punk first emerged that it would in the future be thriving in China.

This striking image of the guitarist from the band Demerit is by the photojournalist Matthew Niederhauser and comes from his book Sound Kapital: Beijing's Music Underground, which contains pictures taken over a nine-year period, during which the scene has coalesced. "The scene has reached a critical mass," Niederhauser told the Observer Music Monthly last month, "and its perpetuating itself but there's no way to tell how fast things might take on. There's still a billion people in the country who aren't touched by it." According to The Economist More Intelligent Life blog:

Just as the 100 Club and CBGB fostered punk movements in London and New York City, Beijing’s D-22 nightclub serves as the epicentre for its burgeoning alternative music scene. Michael Pettis, a Peking University professor who was once a fixture in New York’s East Village, founded the dive bar three years ago. Though the idea of an “underground scene” is often associated with punk, D-22’s small stage hosts a variety of acts, from glam rock to experimental electronic, classic rock ‘n’ roll and Mongolian folk music. Many bands have hard-rocking frontwomen in the vein of Karen O from the Yeah Yeah Yeahs; some sing in both Chinese and English. All eschew the country’s mainstream affection for saccharine pop.

“Sound Kapital: Beijing’s Music Underground” captures the scene in a collection of band portraits culled from thousands of photos taken in D-22’s basement over two years. The style, humour and energy of these subjects are both authentic and familiar. These kids have quite a bit to rebel against.

A new documentary Beijing Punks by Australian filmmaker Shaun Jefford follows the underground music movement. Check out the trailer for the film on China Music Radar ('We love music in China. We would like to share it with you. This is the music industry in China as we see it.') 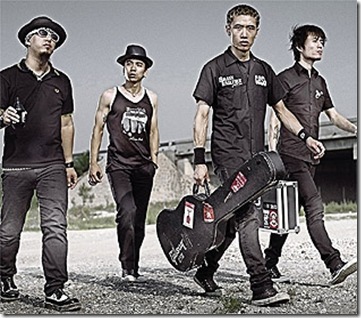 The band BRAIN FAILURE: See: It's Mao Or Never by Jeb Gottlieb. Below their album 'Beijing Calling' 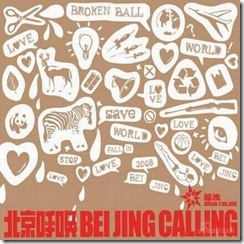 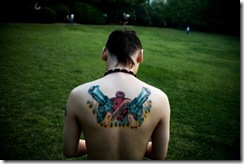 Duwei, drummer for the Nanjing-based punk band Overdose, rests in a park with friends before a gig at the small YuYinTang rock club in Shanghai, China. Photo: M. Scott Brauer / Invision Images