MONTREAL PROTOCOL: THE WORLD WE AVOIDED 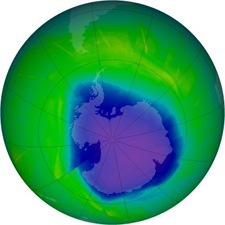 -Richard Stolarski, one of the pioneers of atmospheric ozone chemistry

This is the remarkable story

of the World We Avoided.

It was in the early 1980s that scientists first discovered a 'hole' (in fact a depletion)  in the ozone layer of Antarctica. This extremely worrying development was being caused by chlorofluorocarbons (CFCs).

CFCs were invented in the early 1890s and first used in the 1930s as refrigerants and propellants for chemical sprays.

'While CFCs are not reactive at Earth’s surface, they become quite destructive when they are exposed to ultraviolet light in the upper stratosphere. There, CFCs and their bromine-based counterparts break up into elemental chlorine and bromine that repeatedly catalyze ozone destruction. Worst of all, such ozone-depleting chemicals can reside for several decades in the atmosphere before breaking down. '

Recognising the threat, within a few years, the global community got together and created, in 1989, a worldwide ban of CFCs through a legal instrument called  the Montreal Protocol.

[The full details of this and and subsequent documentation can be found at UNEPs Ozone Secretariat.]

This was the first-ever international agreement on regulation of chemical pollutants. It has been remarkably effective and, as a result, the world has avoided nothing less than a catastrophe.

This has been brought home by a powerful piece of work done by scientists at NASA's Goddard Space Centre, who have simulated what would have happened if CFCs had not been banned and ozone depletion had continued at a steady rate of 3% a year. In short we would have lost two-thirds of the world's ozone layer  by 2065 [see graphic below] exposing us to a massive increase in UV which would, amongst other things, have sent skin cancer rates soaring.

The full story can be found here. Its an encouraging one in such times, one  which has been scandalously under-reported. 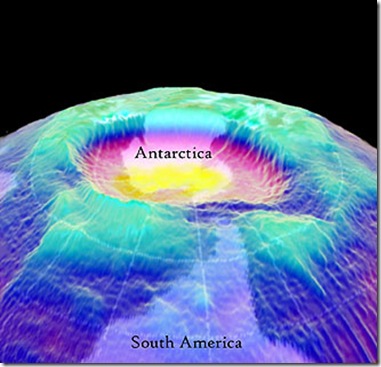 However, according to Nature [12th August 2009] the  the Montreal Protocol has been a unique success but the situation is now more complex. Quirin Schiermeier reports as follows:

'Twenty years after the Montreal Protocol came into effect to regulate substances that deplete the ozone layer, the annual ozone hole above Antarctica shows no signs of recovery.

'As things stand, scientists expect the first signs of recovery of springtime ozone depletion in the polar stratosphere around the year 2065. Outside polar regions, where chemical ozone destruction is less pronounced but potentially harmful to human health, it appears as if ozone levels are beginning to increase.

'Globally, the recovery of ozone will occur in a changing atmospheric environment. Greenhouse gases have a cooling effect on the stratosphere, and climate change is likely to also alter atmospheric transport and circulation patterns.

'What this means for the ozone layer is not exactly clear. It appears that the changes will in some places delay its recovery, while elsewhere they might lead to a ‘super-recovery’ of ozone.

'But not only must models of ozone loss and recovery factor in global warming – abnormally low stratospheric ozone has also a marked effect on climate change here and now. Most strikingly, extreme seasonal ozone depletion over Antarctica seems to explain why the Antarctic Peninsula is warming at an alarming rate while the rest of the continent has actually cooled over the last 30 years. ' 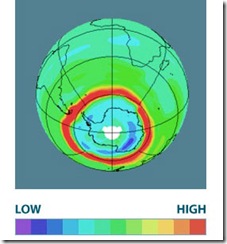 Further complications with the Montreal Protocol are covered in a  recent story by Robynne Boyd in Scientific American [November 5, 2009].

'The problem is that under the Montreal Protocol, which the U.S. has signed, hydrofluorocarbons (HFCs) were promoted as the environmental alternative to ozone-depleting hydrochloro-fluorocarbons (HCFCs), which had become the standard working coolant in refrigerators, air conditioners and aerosol cans. HCFCs, for their part, originally replaced the even more potent ozone-depleting chlorofluorocarbons (CFCs) that were used liberally until the early 1990s. Whereas HFCs do not destroy the ozone layer, they can be thousands of times more harmful to Earth's climate than carbon dioxide, posing a significant threat should they become HCFCs' main replacement.'

'Starting January 1, under the Montreal Protocol, the world's developed nations must cut HCFC consumption and production by 75 percent. It will then become illegal to import, produce or sell Freon (HCFC-22) and HCFC-142b, the ubiquitous refrigerants, for use in new equipment. At the same time, Europe is implementing a ban on HFC-134a (a common car air-conditioning refrigerant that can trap 3,400 times more heat in the atmosphere than CO2), beginning in 2011.'

'The alternatives? Natural refrigerants and a new group of fluorochemicals called hydrofluoro-olefins (HFOs).'