OUR MAN IN RAMALLAH

Computer artist George Snow is on a teaching assignment in Palestine and is sending THE GENERALIST his thoughts and impressions. 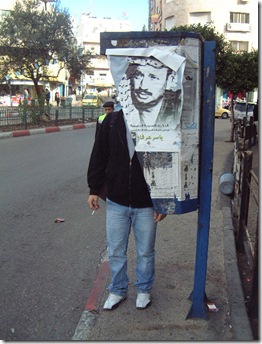 I caught sight of the Holy Land from beneath the wing of the Alitalia flight from Rome. A long straight coastline stretching from the Lebanon to Gaza with Palestine in-between. So familiar from the maps of the TV news reports on the region.

As the plane descended and approached Ben Gurion airport I was aware of the large number of houses. Square ones. Round ones. Tall ones. Small ones. Extending well beyond the limits of Al Lud (or Tel Aviv as it is known to some) the whole landscape was speckled with houses.

From that height, looking down at the toy town houses, I considered the role of housing in times of war. I recall how Churchill reduced the great German cities to rubble. Ignoring strategic or military targets he chose instead to simultaneously reduce the local population and the German housing stock. (Commenting on the Nuremberg trials he told 'Bomber' Harris, head of Bomber Command, words to the effect "Lucky we won old fellow, or it would be us up there.")


One doesn't have to be in Palestine long before one catches sight of the garden fence that the Israelis have erected around their house. Made of concrete and steel this picket fence has the occasional opening to allow military and human movement. It separates existing Israeli housing from that they intend to demolish and re-build in future.


Israeli policy, it would seem, is to knock down the homes of their enemies and build their own. They flatten Gaza, leaving thousands homeless, but prevent the importation of building materials to rebuild homes. (All of this done with the approval of European governments by the way.)


So. Perhaps I have misunderstood the true nature of war. One might have thought the idea of war was to kill the men and rape their women. That at least is how the common foot-soldier might see it- but in truth it has more to do with knocking down the houses of your enemy and building your own. The bulldozer is mightier than the sword? Or I'll huff and I'll puff and I'll blow your house up.


In the mornings I run around Ramallah, choosing a different route on every run. That way I get to know the city and its layout a little better. I am struck by the quantity of new high quality housing. There are houses for the rich, houses for the not so well off, gymnasiums, offices and shops. Something is happening here in Ramallah. Large sums of money are flooding in. It's a political process not unlike that that occurred in Northern Ireland a few years back. Throw money at the problem and it'll eventually go away.


If I were to go away and return in 10 years I might not even recognise the old Ramallah. By then it may be a shining gleaming metropolis- or the Israelis may have decided to bomb it flat.