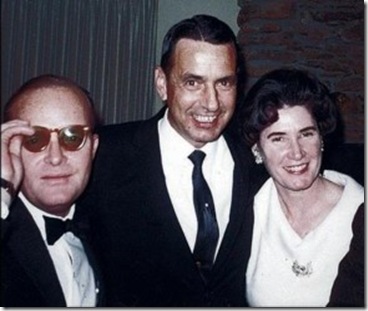 Truman Capote with Alvin Dewey Jr, the Kansas Bureau of Investigation's lead detective on the Clutter family murder case and his wife Marie.

The 50th Anniversary of the murders at the Clutter farm at Holcomb, Kansas would have long ago faded into obscurity had it not been that the writer Truman Capote used the story as the basis of his book 'In Cold Blood', which has been  read and published all over the world  ever since.

The Guardian  today used the opportunity to run a piece by Ed Pilkington, who visited the town and talked to some of the key characters involved.

But no mention was made of one of the most interesting aspects of the book and the circumstances surrounding its creation. Widely claimed as the first 'non-fiction novel', as time has gone on its become clear that there was great deal more fiction than fact in Capote's telling of the story.

The Generalist's story on this theme TRUMAN CAPOTE: TRUTH AND LIES has been one of our most popular posts since it was first published on July 25th, 2006. Check out the story behind the story.