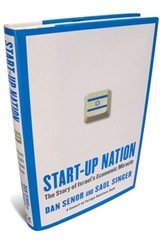 Check out this review.

'There are more new innovative ideas . . . coming out of Israel than there are out in [Silicon] Valley right now. And it doesn't slow during economic downturns." The authors of "Start-Up Nation," Dan Senor and Saul Singer, are quoting an executive at British Telecom, but they could just as easily be quoting an executive at Intel, which last year opened a $3.5 billion factory in Kiryat Gat, an hour south of Tel Aviv, to make sophisticated 45-nanometer chips; or Warren Buffett, who in 2006 paid $4 billion for four-fifths of an Israeli firm that makes high-tech cutting tools for cars and planes; or John Chambers, Cisco's chief executive, who has bought nine Israeli start-ups; or Steve Ballmer, who calls Microsoft "as much an Israeli company as an American company" because of the importance of its Israeli technologists. "Google, Cisco, Microsoft, Intel, eBay . . . ," says one of eBay's executives. "The best-kept secret is that we all live and die by the work of our Israeli teams."

Israel is the world's techno-nation. Civilian research-and-development expenditures run 4.5% of the gross domestic product—half-again the level of the U.S., Germany or South Korea—and venture-capital investment per capita is 2½ times that of the U.S. and six times that of the United Kingdom. Even in absolute terms, Israel has only the U.S.—with more than 40 times the population—as a challenger.

Read the rest  of this review in the  Wall Street Journal