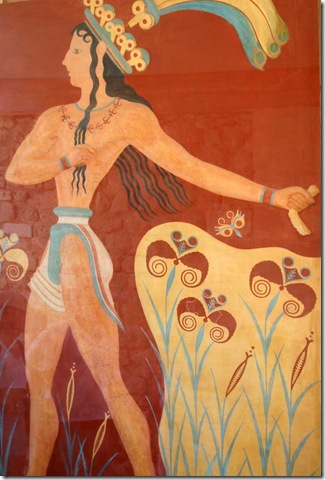 One of the most famous images of Ancient art is the 'Prince of the Lilies', a Minoan fresco at Knossos in Crete. Or is it Minoan?

This and other iconic images of the Minoan civilisation are not what they seem, according to a fascinating long piece by Mary Beard in the New York Review of Books, reviewing 'Knossos and the Prophets of Moderation' by Cathy Gere [University of Chicago Press), available on-line.

Beard says; 'As a general rule of thumb, the more famous the image now is, the less of it is actually ancient.'

Take 'The Prince of Lilies'. The original fragments are a small piece of the head and crown (but not the face), part of the torso, and a piece of thigh, that were then 'restored' into this painting by Swiss artist Emile Gillieron. From the records of the original excavation, it now suggests that the fragments were found in the same general area but not that close together. In other words, they may not even have belonged to the same painting. 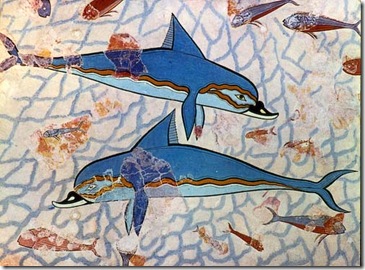 Most of the famous dolphin fresco was painted by Dutch artist, architect and restorer Piet de Jong in the 1920s.

The ancient palace of Knossos itself is the second most visited of all archaeological sites in Greece and attracts a million visitors each year. Yet none of its columns are ancient and its whole reconstruction is questionable. Cathy Gere says the palace "enjoys the distinction of being one of the first reinforced concrete buildings ever erected on the island.' The other was Arthur Evans's own house, the man credited with unearthing the palace. The famous 'snake goddess' figurines that Evans unearthed provided key evidence, in Evans' perception, that they represented the key mother figures of a peace-loving matriarchal society.The figurines are now widely recognised to have been reconstructed from partial remains by Halvor Bagge, an artist working on Evans' team.

Of the original figurine on the right, for instance, 'only her torso, right arm, head, and her hat (except for a portion at the top) were found. It not at all clear, for example, that it is one single snake that has its head in her right hand and its tail in her left.' [Source: Minoan Snake Goddess by Christopher L.C.E. Witcombe.

Kenneth Lapatin tried to track down the provenance of all the known snake goddess figures, apart from those definitely excavated at Knossos or other major sites. Almost all were certain forgeries. See Mysteries of the Snake Goddesses.

Gere's book is centrally concerned with with effect that Minoan archaeology has on 20th century culture and vice versa. She argues that at Knossos, prehistory has been shaped 'to a prophetic modernist vision, which repeatedly reinvented the Minoans as Dionysiac, peaceable protofeminists in touch with their inner souls.' This vision continued to have an influence on popular culture up the 1960s and beyond and links de Chrico, Freud and Robert Graves amongst others. 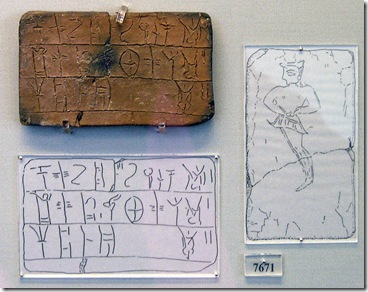 [Left]: 'Mycenaean tablet inscripted in linear-B coming from the House of the Oil Merchant. The tablet registers an amount of wool which is to be dyed.' Source: Wikipedia.

Evans was convinced that the Minoans were not pure Greek and was hoping that the linear-B tablets he definitely did discover at Knossos would, when deciphered, confirm that. He died before Robert Ventris with the help of historical Greek expert John Chadwick succeeded in 1951-1953 cracking the Linear-B script from  and confirmed that it was in fact an earlier version of the Greek language.

According to Wikipedia: 'Ventris' discovery was of immense significance, because it demonstrated a Greek-speaking Minoan-Mycenaean culture on Crete, and presented Greek in writing some 600 years earlier than what was thought at the time.'

We have grown up with the idea that Greek marble statues are meant to be pure white undressed marble. From the Renaissance onwards and the first discoveries of classical antiquities, artists like Michelangelo have assumed this was the ancient aesthetic of the Greeks and sought to emulate this symbol of perfect beauty.


We now know, thanks to the work of archaeologist Vinzenz Brinkmann, that in fact all statues were painted as were the temples that housed them. Over time and due to the elements, the colour has been largely stripped off. Any traces that remained were generally removed by restorers as superfluous. 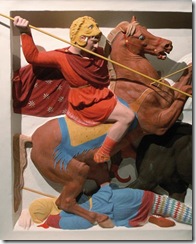 Brinkmann has not only proved his point through 25 years of careful research but has also created reconstructions of what the coloured statues would have looked like based on technical analysis of colour traces; the colours are reproduced using pigments the Greeks themselves would have used.

(Centre): A partial color reconstruction of Athena, based on a c.490 B.C. sculpture of the Goddess from the pediment of the Temple of Aphaia on the Greek island of Aegina. Brinkmann typically leaves areas white where no evidence of original coloration is found.

(Bottom): The “Alexander Sarcophagus” (c. 320 B.C.), was found in the royal necropolis of the Phoenician city of Sidon and depicts Alexander the Great in battle against the Persians.