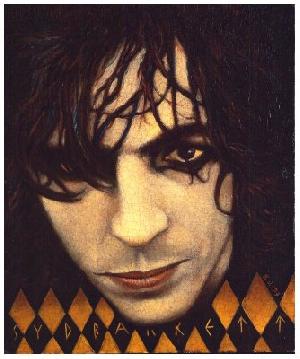 (Left) This beautiful portrait of Syd is by British artist George Underwood, who has kindly allowed us to reproduce it here. George has produced literally thousands of book covers, LP and CD sleeves, adverts, portraits, sculptures and drawings. To find out more and to see a broad selection of his work go to www.georgeunderwood.com

So we've lost two of the giant gods of the psychedelic rock years. The newstands are awash with special commemorative issues; the obituary writers have done their work. Its time for some last comments.

Personal notes: By the time I first saw the Floyd (at Brighton Dome in 1968, a benefit for The Combination, 's Arts Lab of the time) Syd had already left. They were awesome, scary, overwhelming. Gorgeous huge liquid light show and the Azimuth Coordinator whizzing the sound right round the hall. Later got to see them at the Plumpton Festival (1969/70?) (National Jazz and Blues Festival that, in the end, became the Reading Festival).

Strangely, none of the obituaries or accounts I've read note the exquisite timing of Syd's departure. For almost the last two decades the Floyd had existed but in the background. Their records were available but at least two generations had never had the chance to see them; their music remained influential but rather under the radar. Then came Live8 and from the first chord something magical happened. The reunion of warring band members made it emotional but their sound, one realised, had never truly been superseded or emulated. It sounded fresh and unique, poignant and stirring. As an aftermath, Floyd record sales went through the roof, followed by two solo tours by Dave Gilmore and Roger Waters. Then Syd died, as if to cap this remarkable last flourish off.

(The media construction of Syd Barret's Chatterton-like status (tragic romantic) can be largely traced back to Nick Kent's piece on Syd in the NME April 13th 1974 (Similarly his piece on Nick Drake). Both feature in his brilliant collection of rock journalism 'The Dark Stuff'. His recent piece on Syd for the The Guardian is here.

Read also the piece on Schizophrenia. com; it confirms that Syd developed a mental illness - most likely schizophrenia (triggered, it is said, by significant drug use as well as the stress and pressure of his career) - and died of complications related to diabetes.

A similar last flourish happened with Arthur Lee. We were there at the Concorde in for his first ever Love concert in the (at Concorde 2), with his young band, and it truly was a 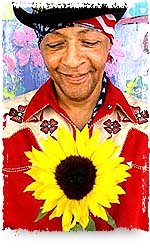 magical event. Certainly in my top 20 gigs. He came on like a cross between Jimmy Cliff in 'The Harder They Come' and Marvin Gaye. He looked cool and majestic, he grooved like a king. Most of all, the songs were truly brilliant. Audience was mainly in their 20s with a sprinkling of the older tribe. The young ones knew all the words, being a bit of a psych-mod capital at the time. Then later, at the Brighton Dome, on the Forever Changes tour. The uncanny and beautifully exact renditions of the song sending shivers up and down one's spine. The last flowering before the leukemia got him.