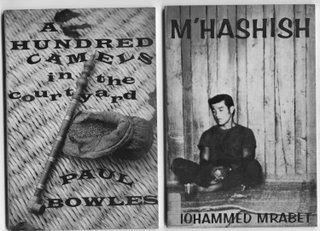 Two gems from The Generalist library, both published by City Lights Books in San Francisco - Laurence Ferlinghetti's famous bookstore and publishing company, in 1962 and 1969 respectively. In the last part of his life, Bowles recorded a lot of Moroccan music, logging all the material at the Library of Congress. He also helped to produce many books of Moroccan stories which he both taped and translated. 'M'Hashish' is one of a number of books based on the stories of the young Mohammed Mrabet (pictured on the cover).
'A Hundred Camels in the Courtyard' is a collection of four tales written by Bowles and set in the contemporary Morocco of the time that he knew so well, but infused with his knowledge of these deeper stories.
To gain a bigger picture of the Tangier's scene, the Ur book is the brilliant 'The Dream At The End of the World: Paul Bowles and the Literary Renegades in Tangier' by Michelle Green. [Bloomsbury 1992]. The blurb concisely sums it up:

'To the expatriates who landed there in the post-war years, the International Zone of Tangier was an exotic and deliciously depraved version of Eden. A sybaritic outpost set against the verdant hills of North Africa, it offered a free money market and a moral climate in which only murder and rape were forbidden. Fleeing an angst-ridden Western culture, European emigres found a haven where homosexuality was openly tolerated, drugs were readily available, and eccentricity was held to be a social asset.'

'At the centre of this extravagant community were Paul and Jane Bowles. A critically acclaimed writer and composer, Paul found Morocco, the perfect setting for his perverse visionary fiction, and for the quotidian intrigue that he loved. For Jane - a brilliant playwright plagued by anxiety and terrified of her own talent - Tangier was as sinister as it was tantalising. When her husband became mentor to a young Moroccan painter, she fell in love with a manipulative peasant woman who, some said, used black magic to keep Jane in her sway.'

Paul Bowles, who died in Tangier at the 88 in November 1995, is particularly fascinating - a kind of pole star around which the whole scene revolves, one of the earliest of the writers to take up residence there and one of the last to leave. The Telegraph obituary describes him as 'the link between the "Lost Generation" of Gertrude Stein and "Beat Generation" of Jack Kerouac.

Having reached Bowles initially through the Beats and the well-documented trips made by Kerouac and Ginsberg (with Peter Orlovsky), I came to his novels rather late - excepting for his most famous, 'The Sheltering Sky' (made into a Bertolucci movie which I remember as being quite good) - and was knocked for six by most of them, particularly 'The Spider's House' and 'Let It Come Down'. There are now a great many of his novels published plus letters, biographies, critical studies and the like yet he is still somewhat of a cult, less well known than Burroughs for instance.

Happened to discover tonight that the publishers Peter Owen in London are reissuing their Modern Classics series (excellent), which includes two books by Jane Bowles - 'Plain Pleasures' and 'Two Serious Ladies.' - and six by Paul.

There is a great single web starting point for studying Bowles further:
Paul Bowles: Online Exhibition and Internet Source Page, produced by the Special Collections Department of the Universe of Delaware Library.
at 10:59 pm