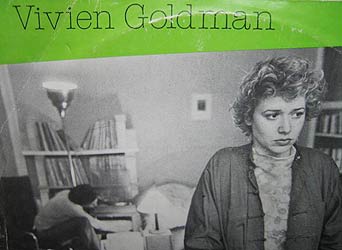 Completely by chance or not, I stumbled across, as one does, this really good little profile of dear friend Vivien Goldman on the blog The Blond Oracle of Delphi. I am very grateful to Rachel Doyle for her permission to reproduce this. Subsequent, tracked down Vivien's My Space site, contacted her after a gap of many years, found she was in London and spoke on the phone. Turns out, Viv is now doing some Professoring in New York and Rachel is one of her students.

Vivien Goldman is living proof that it is very possible to be, simultaneously:
1) Famous in France,
2) A versatile music journalist/author,
3) A post-punk musician,
4) A documentary film-maker, and
5) A teacher in the Clive Davis School of Recorded Music at NYU.

Goldman’s multitudinous transformations have all been handled gracefully. “I’ve kind of done different careers like serial monogamy,” she said with a laugh as she sat at a table at Le Gamin in the East Village, wearing a matching red-orange Puma skirt and jacket. She took off her large sunglasses and smiled, ordering a quiche in flawless French. I pick up a pen and write a brief note to myself. “Coolest lady ever!”

Goldman lived in Paris and worked at a magazine for a year and a half, where she was a member of new wave duo Chantage, leading to modest fame in France. She speaks of her music career now with only one regret: that she didn’t market herself better as a musician.

“"I have been blessed with my life in music,” she said. I’ve sung along with Bob Marley while he played guitar, wrote while Ornette Colman practiced in the other room, and heard Fela Kuti and his Afro beat big band playing for hours and hours.” As well as being sonically resonant, these scenarios were also emotionally moving for Goldman.

Born in London, she is the child of two German-Jewish refugees. Music runs in the family. Her father was a musician who escaped Nazi Germany with his violin in tow.

Goldman has always had music in her life. She spent a long time working on TV and also produced and directed videos in her own independent production company. This is where she launched Flavor Flav (of Public Enemy fame) in an Eric B. and Rakin video for “I Ain’t No Joke.”

“One of my early jobs was working in PR at Island Records. At that time, the industry was sort of finding its way. There was that whole making-it-up-as-you-go-along spirit. I worked at Island records with Bob Marley and that’s what changed my life. Otherwise, I don’t know if I’d be the person I am now.”

“Time magazine recently said Bob Marley’s Exodus was the most significant album of the century. I was around while he was recording it,” said Goldman.

Goldman met Bob Marley in 1975 after she left the University of Warwick, where she studied English and American literature in college with famous feminist Germaine Greer, author of The Female Eunuch.

Goldman later worked for all the major British music magazines, such at NME, Sounds, and Melody Maker. “I had that unique career within the music press- they all poached me one after the other. We were traded like football players. I went from one team to the other.”

Goldman was working at Sounds, which she describes as a feisty underdog music paper, when she first became exposed to punk. It was a breath of fresh air for her. At the time, she says, the music scene was really boring and stilted. “There were these big superstars that everybody was completely obsessive about. There were only three main players and they were the type that played stadium shows and did 10-minute-long guitar solos,” said Goldman. “At that time, everything was being invented so it was like a boiling cauldron of creativity. These were all new ideas!”

Goldman moved from London to New York in 1989, stopped doing TV documentaries and began to write again. She has written five books, including Bob Marley’s first biography Soul Rebel/Natural Mystic. She also wrote Black Chord - a book tracing the connections between music and the African Diaspora. That book was ambitious in scope- but Goldman says that her new Bob Marley vehicle; the Book of Exodus is much more so.

“The Book of Exodus is an unusual book – it’s the making of the album and it looks intensely at the social and political events surrounding Bob Marley in a very brief period of his life, between 1976 and 1978,” said Goldman. “That’s when gunman came into his house and tried to kill him. I had actually been staying with him the day before the assassination attempt.”

In early 2005, Goldman taught a class entitled ‘Beyond Classic Punk’ for NYU’s Clive Davis School of Recorded Music. The class, which is the first of its kind, was enormously popular and had a huge waitlist.

“It was very funny, cause I was like a true punk professor. I’d never done it before, so it was exactly like the Slits when they got up on stage and didn’t know how to play their instruments.”

Goldman was astounded by the response and output of her first class:
“It’s an old cliché, that the teacher learns from the class as much as the class learns from her but it was true. I got emotional when I saw the final project fanzines. People put so much passion into their work and I was so touched by that. “