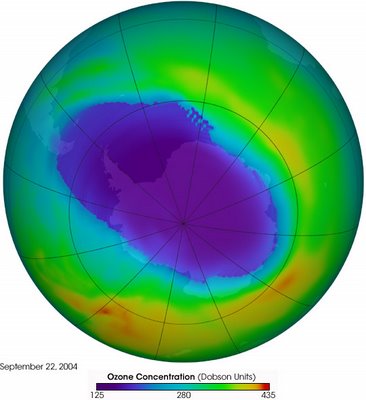 The image above is the first publicly released image from the Aura mission. Acquired by the mission’s Ozone Monitoring Instrument (OMI) on September 22, 2004, the image shows dramatically depleted levels of ozone in the stratosphere over Antarctica. Purple shows areas with very low ozone concentrations (as low as 125 dobson units), while turquoise, green, and yellow show progressively higher ozone concentrations.Aura is the third and final major Earth Observing System (EOS) satellite. Aura’s view of the atmosphere and its chemistry will complement the global data already being collected by NASA’s two other EOS satellites, called Terra and Aqua. Collectively, these satellites allow scientists to study how life, land, water, and the atmosphere work together as a whole system. Source: Earth Obseratory

RealClimate is another of the top five science blogs by scientists, as ranked by Technorati.
Produced by climate scientist Stefan Rahmsdorf, it is aimed at the interested public and journalists. He writes: 'We aim to provide a quick response to developing stories and provide the context sometimes missing in mainstream commentary.'

A good example of his approach is the 28th July '06 post: 'Peter Doran and how misleading talking points propogate. '

'Peter Doran, the lead author on a oft-cited, but less-often read, Nature study on Antarctic climate in 2002 had an Op-Ed in the NY Times today decrying the misuse of his team's results in the on-going climate science 'debate'. As we discussed a while back (Antarctic cooling, global warming?), there is a lot of interesting stuff going on in Antarctica: the complexities of different forcings (ozone in particular), the importance of dynamical as well as radiative processes, and the difficulties of dealing with very inhomogeneous and insufficiently long data series. But like so many results in this field, it has become a politicized 'talking point', shorn of its context, that is mis-quoted and mis-used by many who should (and often do) know better. Doran complained about the media coverage of his paper at the time, and with the passage of time, the distortion has predictably increased. Give it another few years, maybe we'll be having congressional hearings about it...'
at 4:40 pm