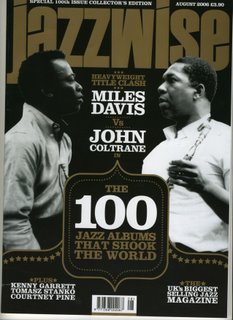 The 100th issue of Jazzwise has just been published - and a fine one it is to. For those unfamiliar, this is Britain's best-selling jazz monthly (available in WHS and other mainstream ouitlets) edited by Jon Newey, who does a thorough job of documenting the latest news, releases and tours as well as featuring many interesting interviews and profiles.

This issue's main feature - The 100 Jazz Albums That Shook The World - is well worth a study. Natch, Kind of Blue and Love Supreme are Nos 1 and 2. Found several albums new to me that I'll be checking out.

Pleased to see one of my favourite albums of all time - 'Indo-Jazz Suite' by John Mayer and Joe Harriott - in the list at No 88. I still have the vinyl copy I've had since I was 17, when we used to sit round and listen to it while smoking Gauloise and learning to play Go.

(Came across a clipping from Mojo April 2004 ('Dance to the Sitar Men' by Justin Spear) about the men behind the 60's sitar groove which confirms that this 1966 record really started the 'whole Indo fusion thing'. Spear writes: 'Put simply, its the wound of a five-piece jazz group and a traditional Indian band - including sitar and tabla - stuck in the same studio and left to forge a new sound of the '60s. Located somewhere between jazz, classical and the complicated form of Indian raga. It still sounds strikingly contemporary.' Amen.

If I had to suggest one book that isn't on the list it would be the obscure but wonderful 'Red and Hot: The Fate of Jazz in the Soviet Union' by S. Frederick Starr If that sounds dull, think again. The first negro jazz band arrived in a few weeks/months after the Revolution and, ever since, jazz has had a strange often underground existence in Russian culture. At one point, Stalin had exiled so many musicians to one Siberian labour camp that they formed the biggest baddest jazz band in the Empire. There's a revised edition out now. The Amazon blurb says that Starr (a prof and a jazz musician himself) 'argues that jazz and jazz-inspired music and world popular culture contributed to the demise of the Communist ideal. The story of jazz represents the history of the emancipation of millions of former Soviet citizens unconsciously groping for a more open relationship between the state and society.'

(Incidentally, can I be the first to register my annoyance about OMM's latest cover feature, heavily splashed on the front of the main paper: Big Brother's Russell Brand meets Keith Richards. Sounded good enough to shell out £1.70. What a disappointment. Brand is an amusing enough fellow but his long description of getting the commission, travelling to the gig, adventures in the hotel room etc took up 98% of the piece. He did finally get in the room with Keith for enough time to exchange a few pleasantries and take a few photos - and then that was it. The whole interview took up about four paras. Short-changed or what!)

THE AMERICA OVER THE WATER TOURING COMPANY are travelling the this autumn. http://www.shirleycollins.co.uk See Previous Posting: Over The Water & Over The Road

Jim Morrison's last handwritten notebook was auctioned on for £72,000. You can see some of the pages and details of the sale here. Read the original story about the sale in The Independent and then the comments on John Densmore's blog for a closer-to-the-truth version of the story.

Top of the Pops