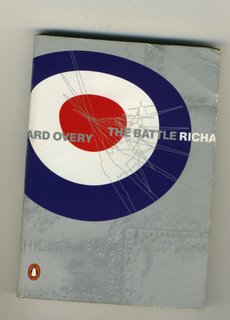 It's funny how things coincide during the course of the week.

I suddenly had an urge to read again 'The Battle' (Penguin Books). This strange and wonderful little pocket-sized book, with a narrative story of just 135 pages, (which I'd read twice before), written by eminent professor Richard Overy, editor of The Times Atlas of World History.

It seeks simply to give a completely fresh picture of the Battle of Britain based on the latest historical evidence. Its is always interesting to read about some iconic incident and to be told that it didn't happen in the way that we thought it did. That behind the big mythological and symbolic facade lies an even more interesting story that often contradicts the official truth with a much more complex narrative. Propogands is all about simplification and manipulation.


That same week, whilst in the spell of above, I recieved two e-mails. The first concerns the article, subsequently published in The Guardian, regarding the real truth behind the recent events of the supposed plot to blow up a number of civil airliners. Entitled 'The UK terror plot: what's really going on', its written by Craig Murray, writer and broadcaster. His web site declares: 'As Britain's outspoken Ambassador to the Central Asian Republic of Uzbekistan, Craig Murray helped expose vicious human rights abuses by the US-funded regime of Islam Karimov. He is now a prominent critic of Western policy in the region.'

The article begins: ' I have been reading very carefully through all the Sunday newspapers to try and analyse the truth from all the scores of pages claiming to detail the so-called bomb plot. Unlike the great herd of so-called security experts doing the media analysis, I have the advantage of having had the very highest security clearances myself, having done a huge amount of professional intelligence analysis, and having been inside the spin machine.

'So this, I believe, is the true story.

'None of the alleged terrorists had made a bomb. None had bought a plane ticket. Many did not even have passports, which given the efficiency of the UK Passport Agency would mean they couldn't be a plane bomber for quite some time.'

The Guardian removed his remarks about John Reid. The whole piece is intact on his website here. I know very little about Craig Murray so readers must judge for themselves.

Then came the other e-mail, attaching a link to an article entitled 'Stop Belittling the Theories about September 11' by Bill Chritison on the Dissident Voice website. It reads in part:


'Why is it important that we not let the so-called conspiracy theories surrounding 9/11 be drowned out? I have come to believe that significant parts of the 9/11 theories are true, and that therefore significant parts of the “official story” put out by the government and the 9/11 Commission are false. I now think there is persuasive evidence that the events of September did not unfold as the Bush administration and the 9/11 Commission would have us believe. The items below highlight the major questions surrounding 9/11 but do not constitute a detailed recounting of the evidence available.

'ONE: An airliner almost certainly did not hit The Pentagon. Hard physical evidence supports this conclusion; among other things, the hole in the Pentagon was considerably smaller than an airliner would create. The building was thus presumably hit by something smaller, possibly a missile, or a drone or, less possibly, a smaller manned aircraft.

'Absolutely no information is available on what happened to the original aircraft (American Airlines Flight 77), the crew, the “hijackers,” and the passengers. The “official story,” as it appeared in The 9/11 Commission Report simply says, “At , American Airlines Flight 77 crashed into the Pentagon, traveling at approximately 530 miles per hour. All on board, as well as many civilians and military personnel in the building, were killed.”

'This allows readers to assume that pieces of the aircraft and some bodies of passengers were found in the rubble of the crash, but information so far released by the government does not show that such evidence was in fact found. The story put out by the Pentagon is that the plane and its passengers were incinerated; yet video footage of offices in the Pentagon situated at the edge of the hole clearly shows office furniture undamaged. The size of the hole in the Pentagon wall still remains as valid evidence and so far seems irrefutable.

'TWO: The North and of the almost certainly did not collapse and fall to earth because hijacked aircraft hit them. A plane did not hit Building 7 of the Center, which also collapsed. All three were most probably destroyed by controlled demolition charges placed in the buildings before 9/11. A substantial volume of evidence shows that typical residues and byproducts from such demolition charges were present in the three buildings after they collapsed. The quality of the research done on this subject is quite impressive. '

I am not a conspiracy theorist. I haven't evaluated the evidence myself at first-hand or in detail. But there's a smell in the air. I keep thinking about the story of the Battle of Britain. Maybe the authorities believe the truth is too hard for us to handle. More, I suspect, to come.