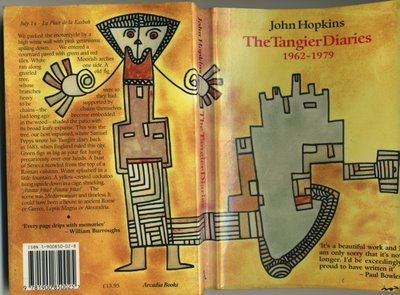 It is one of the great pleasures, for one such as I, to sift and search second-hand bookshops in search of treasure. So it was a good day when I recently discovered 'The Tangier Diaries 1962-1979' by John Hopkins [Arcadia Books 1997], since when I have been in its spell. (Unfortunately finished it today, at 4:00 in the afternoon, arising late after a battle with some
bourbon the night before.)

Young American Hopkins, a prodigious traveller and novelist, was fortunate to inhabit the Tangiers scene during some of the most interesting years and his beautiful diary - containing entries ranging from a few lines to several pages - is full of wonderful pen portraits of the many and various characters on display - Paul Bowles, William Burroughs, Brion Gysin amongst them, vivid little street scenes and evocations of landscape, insightful passges about writing and his struggles with it, social events and personal stories. He travels throughout Morocco, a country he comes to deeply love and admire, particularly the Sahara which provides him with something akin to a spiritual experience.

Three short extracts must suffice, to whet the appetite:

1964: July 6th: 'I gradually work myself, through a period of protracted concentration, into a state of receptivity where the semi-real idea for the next book becomes inevitable. These days of apparent inactivity with my mind in neutral, often turn out to be the most productive.
As Burroughs says: "Your mind will answer most questions if you learn to relax and wait for the answer. Like one of those thinking machines, you feed in the questions, sit back, and wait..."

1967, February 24 - Tangier: 'The siren of a departing ocean liner makes me dream of Camus

1973, June 8th: 'Tangier City Report: Weather balmy. People stroll the boulevard looking brown from the beach, clean from the sea, free in their light summer clothes. A naval ship is in port, and young, bearded tattooed sailors are making the shopkeepers happy.'

ADDENDUM: An equally fine book in The Generalist library is another second-hand find - 'A Year in Marrakesh' by Peter Mayne [Eland Books, London/Hippocrene Books, New York. First paperback 1982. Originally published 1953.] An outstanding piece of travel literature, which begins 'I am a stranger in these parts and Tangier feeds on the flesh of strangers...' and from then draws you rapidly into Moroccan culture at street level, filling your nostrils with the smells of the blossom and ordure, your mind's eye with vivid scenes to enchant and exhilarate.
at 11:01 pm

You got a GREAT blog here John. I am loving every parts of it. By profession, I am connected to Software and such, but I too like to be a generalist in the most general form - a multi faceted individual. These people are so married to their jobs that their lives have become extensions of what they do for living. I admire people who break this mold. I just wanted to throw out my thoughts while I go back to read your other entries. Keep writing.