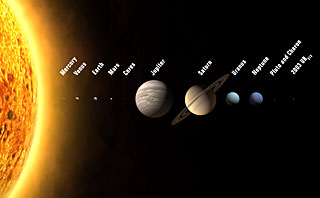 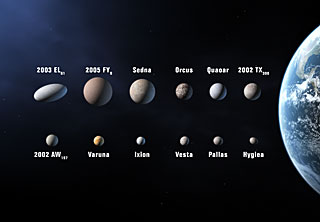 (Bottom) More new planets are likely to be announced by the International Astronomical Union in the future. Here are the dozen ‘candidate planets’ currently on IAU’s ‘watchlist’ which keeps changing as new objects are found and the physics of the existing candidates becomes better known.

On August 24th, between and CEST, if all goes according to plan, the world’s astronomers, who are meeting at the International Astronomical Union conference in , willvote for or against a new definition of the term ‘planet.’

According to the Resolution they will vote on, two conditions must be satisfied for an object to be called a planet. First, the object must be in orbit around a star, while not being itself a star. Second, the object must be large enough (or more technically correct, massive enough) for its own gravity to pull it into a nearly spherical shape.

The matter has been under discussion for two years. If the new definition is agreed, then we will now have 12 planets in our Solar System.

The Resolution also defines a new category of planet - a ‘pluton’ (Pluto-like object) . Plutons are distinguished from classical planets in that they reside in orbits around the Sun that take longer than 200 years to complete (i.e. they orbit beyond Neptune).

Plutons typically have orbits that are highly tilted with respect to the classical planets (technically referred to as a large orbital inclination). Plutons also typically have orbits that are far from being perfectly circular (technically referred to as having a large orbital eccentricity). All of these distinguishing characteristics for plutons are scientifically interesting in that they suggest a different origin from the classical planets.

For an alternative view see The Panda's Thumb, one of the top five science blogs written by scientists, according to Technorati ratings.