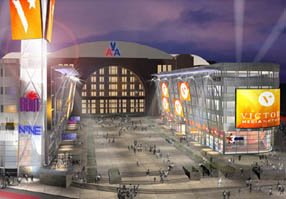 URBAN SCREENS is a concept developed by Mirjam Struppek, who define them as: 'various kinds of dynamic digital displays in urban space such as LED boards, plasma screens, information terminals but also intelligent architectural surfaces being used in consideration of a well ballanced, sustainable urban society - Screens that support the idea of public space as space for creation and exchange of culture and the formation of public sphere by criticism and reflection. Its digital nature makes these screening platforms an experimental visualisation zone on the threshold of virtual and urban public space.'

'[The site] investigates how the currently commercial use of outdoor screens can be broadened with cultural content. We address cultural fields as digital media culture, urbanism, architecture and art. We want to network and sensitise all engaged parties for the possibilities of using the digital infrastructure for contributing to a lively urban society, binding the screens more to the communal context of the space and therefore creating local identity and engagement. The integration of the current information technologies support the development of a new integrated digital layer of the city in a complex merge of material and immaterial space that redefine the function of this growing infrastructure.

I like what Virtual Dschungle 5 have to say on this site about their media facade project in Vienna:

'The harbingers of the media city are cropping up everywhere: projected images the size of an entire facade, huge screens on roof tops and culture buildings used as flickering display surfaces. Developments in the area of display technologies have produced new possibilities for hybrid architecture. The theme of media facades in architecture is not simply the next fashion trend, but represents a step in technological development that will have a lasting impact. This trend will affect the city with or without architects' collaboration. Therefore the important thing is to assume social responsibility and to integrate the new technologies in building in a culturally ambitious way. For an Austrian architecture scene that likes to experiment the potential of such developments is a highly topical question....'