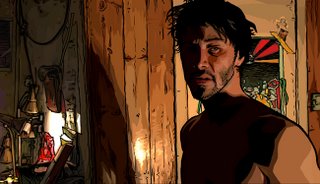 This movie is a double triumph. Firstly, it is the best Philip K. Dick movie to date. That is, all previous movies (including the legendary 'Blade Runner', drawn from ‘Do Androids Dream of Electric Sheep?’), 'Minority Report', 'Total Recal'l, John Woo’s 'Paycheck' and others have ripped out key elements of Dick’s plot and turned them into action thrillers. This film suffuses us with the psychological world that Dick inhabited and is thus the truest vision of his worldview yet brought to the screen.

If you want to confirm this, then read Emmanuel Carrère’s superb biography ‘I Am Alive and You Are Dead’, which finished earlier on the day I saw ‘Scanner’. Carrère brilliantly melds the complex biography of Philip Kindred Dick (1928-1982) with insightful descriptions of his stories but then leaps beyond conventional biography into full-scale I-am-in-Dick’s-mind type passages which work surprisingly well. Five days reading this book is enough to make you edgy and to interfere with your reality model.

Of course, this is Dick’s stock-in-trade. I have always believed him to be ’s Kafka or Orwell (or both) - a speeded-up paranoid with a brilliant musical and logical mind at war with his insane visions, accelerated by his massive intake of both legal and illegal chemicals and his constant and curious relationships with a whole string of women.

As we accelerate further into the modern age, with its reality tv, its mind-numbing control mechanisms, its genetic experiments and extreme weather, its war against terror and its drug-saturated consciousness, what may have seemed paranoid in the past now feels just like our new environment. Its a world that looks ever more like of one of Philip K. Dick's inventions.

A good description of Dick's world is ‘Drug-addled, disturbed, depressed…but Philip K. Dick saw our future’ by Ian Bell, (Sunday Herald 20.8.06) who writes: ‘[Dick] said important things…about the world in which we live, things “proper” novelists seem always to avoid. He told us that any reality is debatable, that power and manipulation go hand in hand, and that individuality is precarious.’

The second triumph of 'A Scanner Darkly' is that its an animated film of rare quality, which has earnt itself a place in the history of the genre as well as doing well at the box-office. [The last successful adult animated movie in the - aside from tv spin-offs 'Beavis and Buthead' and was 1981’s fantasy epic 'Heavy Metal'.]

Toe make the film, director Richard Linklater used a proprietary software programme named Rotoshop, an earlier version of which he had experimented with on a previous cult lo-budget film 'Waking Life'.

This is a sophisticated digital version of a technqiue called 'rotoscoping’, first used commercially by animator Max Fleischer, who patented the system in 1917. Ralph Bakshi who made the full-length animation feature 'Fritz the Cat' (based on Robert Crumb's comics) used rotoscoping in his largely-forgotten version of 'Lord of the Rings'. It was also used in a famous 1985 pop-video for A-ha’s 'Take On Me'.

'Scanner' is shot in real-life with real actors - Keanu Reeves (a matrixed-out cardboard cut-out), Robert Downey Jr, (motormouth with real drug and jailtime experience), Woody Harrelson (well-known grass smoker and full-on space cowboy) and Winona Ryder (whose godfather was Timothy Leary and whose Dad knew Dick and had one of his jackets in his closet) – using digital cameras. The animation artists then used Wacom digital pens and tablets connected to Apple G5s to trace the movement of actors in every scene. These initial drawings were then enhanced to give a greater 3-D effect, scenery and colour were added, and final completed sequences were then rendered and output onto film.

It is a brilliant success because it perfectly suits the material (drugged out, weird perspectives, interior and exterior monologues, shape-shifting personalities) but also has an incredibly strong and unique graphic style. This makes it, by my book, the second greatest ‘cinematic graphic novel’ alongside Robert Rodriguez’s ‘’, which transposed brilliantly the work of Frank Miller to the screen in a marvellously original way.

The best articles I’ve so far found on the making of the film are as follows:

All these and much more can be found on the excellent Philip K. Dick website

Lengthy entry in Wikipedia with loads of links 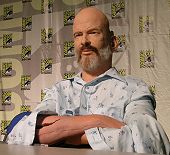 The head of a life-sized facsimile of Philip K. Dick is missing. Built using the latest artificial intelligence technology, it had realistic skin, could make eye contact, had believable facial expressions and could hold up rudimentary conversations about Dick’s books. It began making personal appearances, including being on the panel to discuss ‘A Scanner Darkly’ at the Comic Con in and the plan was to send it round the country promoting the movie. Then, in a quirk of fate that only Dick himself would dream up, the robot’s maker David Hanson, exhausted and jet-lagged, left the head in a bag when he disembarked from a flight from to Vegas last December. The airline then found the head, put it on another flight to Hanson in but it never arrived.

UPDATE: Do Robots Dream of Copyright by Wendy M. Grossman (The Guardian), Thanks to Flo.

According to Paul Arendt (The Guardian 22.8.06), two new films are being made based not on the stories by Dick but on his life

The other is a so-far untitled movie starring life-long Dick fan Paul Giamatti ('American Splendour', 'Sideways') as writer. He will also co-produce in tandem with the Phillip K. Dick Estate, led by two of his daughters Laurie Leslie and Isa Dick-Hackett. The script is being written by Tony Grisoni, who worked on Terry Gilliam's 'Fear and Loathing in '.