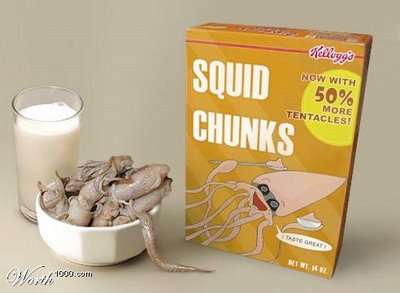 A new concept in breakfast cereals. Real science or clever artifice? See: Worth 1000

The most popular science blog written by a scientist according to Technorati is Phyringia, which is listed 179th in their top 3,500 blogs.

Its written and assembled by PZ Meyer a biologist and Associate Professor at The University of Minnesota Morris in the US of A. 'Phyringia' refers to a stage in the evolution of embryos which he and his students study a lot apparently. I'm at somewhat of a loss to explain its great popularity, which is not to say that it isn't lively, interesting and amusing. But Meyer is not only inexplicably interested in cephalopods but also carries articles on such topics as an Oliver Reed film that he happened to watch one afternoon. Good on you.

I enjoyed his post on 'In Search of the Red Demon' by Scott Cassell, who describes his experiences making a documentary in the Sea of Cortez entitled 'Humboldt: The Man-Eating Squid'. He writes: 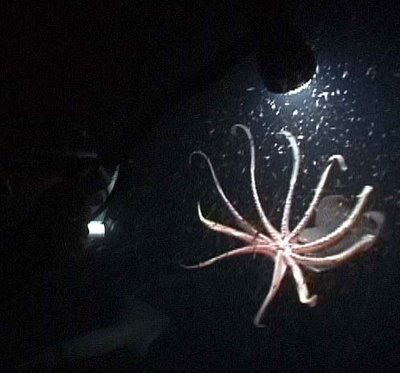 'For most people, the word “squid” probably conjures images of deep-fried appetizers, not flesh-eating carnivores. But the truth is, Humboldt squid have approximately 1,200 sucker discs, each one lined with 20 to 26 needle-sharp teeth. This allows the Humboldt to attack its prey with more than 24,000 teeth at once. And nestled in its bed of eight muscular arms and two feeding tentacles is a disproportionately large, knife-edged beak similar to a parrot’s. But the Humboldt is much larger than a parrot: they have been found as large as 14 feet in length and weighing more than 700 pounds.

'In addition to the Humboldt’s enormity and impressive array of weapons, this magnificent mollusk possesses a legendary ferocity. The local Mexican fishermen call it Rojo Diablo, or Red Demon. When I arrived in Mexico for the dive, several fishermen told tales of how people had experienced violent deaths after falling in the water with these red demons: “…they would be pulled down and devoured in moments.”

'These stories were true and I knew it. So I developed equipment and techniques to counter a possible attack. These precautions included: anti-squid armor suits; armor plating for the vulnerable parts of my mixed-gas rebreather; anti-squid cage; and back-to-back diving techniques. To prevent being pulled down by a pack of squid, steel cables connected divers to the boat at all times. If these measures sound extreme, I can assure you they weren’t. Each one came into play and proved to be completely necessary.'