A wind of change is blowing through the world of  the War Against Drugs and Prohibition. As reported in two Previous Posts (see at end), that wind is blowing from Latin America and is circulating in Europe. 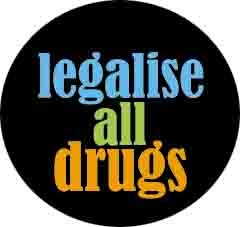 Virtually Legal in The Economist [Nov 12th 09) says that California where  smoking cannabis is now easier than almost anywhere in the world, 'offers the most visible evidence of a tentative worldwide shift towards a more liberal policy on drugs. Although most countries remain bound by a trio of United Nations conventions that prohibit the sale and possession of narcotics, laws are increasingly being bent or ignored. That is true even in the United States, where the Obama administration has announced that registered cannabis dispensaries will no longer be raided by federal authorities.

'From heroin “shooting galleries” in Vancouver to Mexico’s decriminalisation of personal possession of drugs, the Americas are suddenly looking more permissive. Meanwhile in Europe, where drugs policy is generally less stringent, seven countries have decriminalised drug possession, and the rest are increasingly ignoring their supposedly harsh regimes. Is the “war on drugs” becoming a fiction?

'Personal possession of any drug—even the hardest—is not a crime in Spain, Portugal, Italy, the Czech Republic or the Baltic states. Some German states and Swiss cantons take the same line. Portugal is especially liberal: rather than fining users or punishing them in other ways (such as removing their driving licences), it usually just impounds their stash and sends them on a course of treatment and dissuasion. Since it began in 2001, the policy has led to a rise in the number of people seeking treatment but no apparent increase in use.'

In Britain, the government has made the headlines by sacking 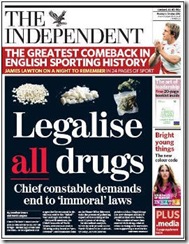 David Nutt. The papers are full of  talk about Regulation and Legalisation as a better option for dealing with Britain's drug issues.

'Alan Johnson, the home secretary, has sacked Professor David Nutt as senior drugs adviser after the scientist renewed his criticism of the government's decision to toughen the law on cannabis. Johnson wrote to Nutt saying he no longer had confidence in him as chairman of the Advisory Committee on the Misuse of Drugs (ACMD) and asking him to consider his position.' Since then five members of ACMD have resigned. 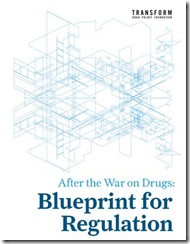 T he lobby group Transform have just released their report 'After the War on Drugs: Blueprint for Regulation' Extracts from the Executive Summary are produced below. This document actually sets out a practical plan to conceptualise and manage the transition to a different style of drug regime. 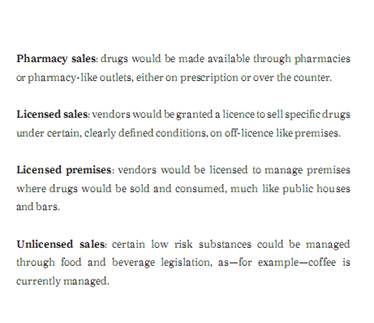 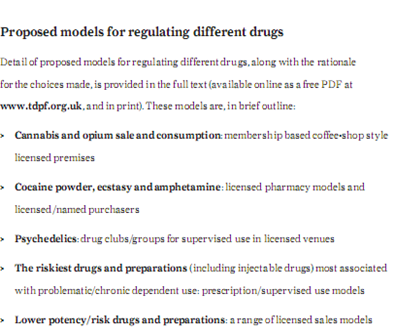 David Nutt is a respected and excellent scientist who as part of the government's advisory panel worked with other outstandingly talented, sensible and knowledgeable people. Unfortunately, the government has made a nonsense of the categorization of drugs by ignoring the advice of those in a position to give it based on rational and sensible thought and instead adopted the notion of sending the 'right message' where what is 'right' is determined by Gordon Brown on the basis of popularist politics. The drug war has created hugely more suffering than drugs themselves. It is self-evident that all drugs should be decriminalized and dealt with along the lines adopted by the Portuguese government which in 2001 became the first European country to officially abolish all criminal penalties for personal possession of drugs, including marijuana, cocaine, heroin and methamphetamine. Unfortunately, such a move in the UK can now be considered extremely unlikely...Gordon has ruled that political expediency and popularity with the electorate is far more important than following the advice of experts. So much for evidence-based politics - what a bunch of assholes!